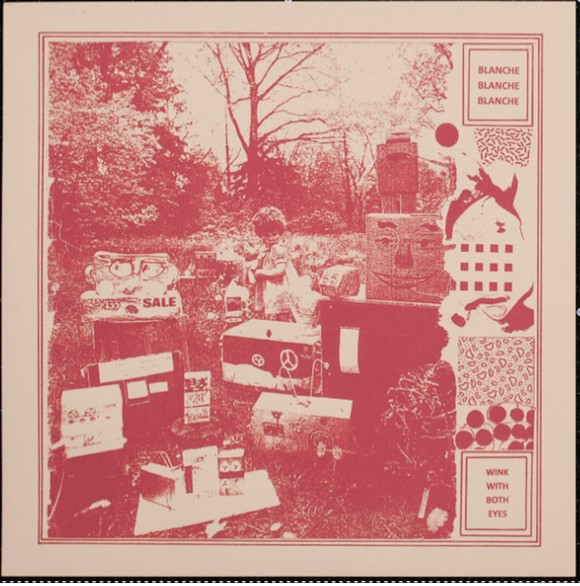 You’ll hear track one, and you’ll think “what the hell is this,” because that’s exactly what I did, and it’s not going to get any easier. Blanche Blanche Blanche (hereafter BBB (or B^3)) are from Vermont and play synth-pop. Wait, maybe I shouldn’t say ‘pop,’ because it’s definitely not poppy. It’s catchy in a weird, deliberately flat-on-its-face kind of way. Songs are anchored by a tinny, muffled drum-beat, usually built on one measure-long synth loop, and oddly dead-pan vocals. Once in a while, there’s a little couple note synth lick for accent, but for the most part – that’s the BBB Blueprint (or BBBB (or B^4)). It’s got a mechanical feel – I don’t think this was made by humans at all…probably robots.

Once you get over the initial strangeness (I dove headlong into the album) it’s weirdly compelling at times, like on the title track “Wink With Both Eyes,” which features some aggressive instrumental work which is a nice contrast to the general low-energy vibe of the album. At moments it sounds a little like TOTAL CONTROL’s less band-oriented moments, I guess, if I had to put a band to it that’s usual fare for this blog, but really it sounds a lot like a lo-fi FREEZEPOP. I do like the 80’s wood-panelled TV synth aesthetic – this album might give you chillwavey ‘nostalgic images of youth’ or whatever, if the ARIEL PINK thing is your bag. It’s good at times, but really there’s a little too much here. The thing is 16 tracks long, and some of the songs just go on a little too long for me, given how simple the songs are. Really, you’ll know in the first 30 seconds whether you’ll like a song or not – that being said, “Jason’s List” is pretty good. All the songs revel in deadpan strangeness, but some never resolve into something compelling – some feel haphazardly constructed, as though the parts of the song don’t really belong together (Appetite), or just aren’t that enjoyable (Duke on the Beach). Some tracks could honestly pass for David Liebe Hart instrumentals on Tim & Eric – make of that what you will. It’s weird, which is good. Maybe it’s just not my flavor of weird.

Memory Motel are a Reno, NV group, and judging by the name and the test-pattern aesthetic of the cover, you’d think they were a chillwave thing. Fortunately, they’re not – they play a hazy psychedelic pop spiked with electronic elements. This short little 7″ contains only two songs, the first of which is “Wasted Days,” which features spacey keyboards and gentle, chiming guitars. It’s all held together by a pretty cool drum loop – it’s reminiscent of BOARDS OF CANADA, but maybe with the DEERHUNTER guy singing…but imagine that guy didn’t suck so badly. It’s pleasant to listen to, and builds nicely to an actual riff without devolving into a smear of instruments, and without coming off like a gimmick. It’s a pretty solid track.

The B-side is called “Lost Souls”, which doesn’t quite work as well. The guitar part the beginning is built on is really nice, but the keyboards are relied upon too much – it feels about twice as long as it actually is. It feels very, very heavily influenced by Radiohead’s “Exit Music For A Film,” but there’s not quite enough going on here to keep my interest, though the whistling is nice. This band  does a good job of mixing electronic elements with non-electronic elements, and knows how to create a lush soundscape, for sure, but with time, the songwriting is sure to get stronger.

Swedish punk sung in French reviewed by an American writer. Globalization’s nuts. I know maybe 10 words in French, so I’ve no clue what they’re singing about, but it’s fast, it’s catchy, and it’ll get you moving. The band makes use of keytar, giving them a really strong LOST SOUNDS vibe, but it’s not used as a gimmick or a LOOK AT US – it’s just another instrument, put to excellent use on tracks like “Remords,” shooting the track through with some awesome squiggly Atari vibes. The song instantly burrows into your skull, even if you haven’t got the faintest clue what it might be about. This 84 second rager is over before you blink, but this veers into the utterly inexplainable “Le Voleur de Chaleur.” This track opens with a minute-long ye-ye detour – FRANCOISE HARDY vibes abounding, before dropping into a wasteland of fuzz as the party is suddenly crashed by ripping hardcore. Next comes “Le Vague Noire,” a mid-tempo song adorned by spoken vocals. The Game Boy sonic aesthetic works here really well. The keytar is immediately recognizable and adds to the music, but also shares space with the guitar on tracks like “Questions.”

The point is: Keytars aren’t a novelty here. It’s used to the same efficacy as any other instrument, and all 6 songs on this are winners. This isn’t being put out by any label yet, but it ought to be.

Whenever I get frustrated with how slow things seem to happen on the internet – getting an email back, or trying to download something, I try to remind myself how slow things used to happen – when hearing about the music scene in California used to mean waiting for a record to get mailed across the country, or waiting for someone to put together a zine, whatever – point is, sounds and musical ideas now move with such lightning speed that it’s almost meaningless to say “This is California punk” or “This is NYC garage” – the world’s so instantly accessible to us, what does it matter to say that a thing’s from ‘here’ and not ‘there?’

The question’s relevant, especially faced with the rise of a certain musical melting pot class, of which Austin’s Rayon Beach is a member. This 3 piece plays a brand of music that seems to me to be an amalgamation of a lot of things that are very ‘now’, and they blend it together in a good way. To put it down on paper, this is fairly laid-back garage punk, but the secret weapon is Rachel Scherr’s keyboards, which lift Rayon Beach above a sea of faceless similar bands. The keys shimmer and subtly add to the mix, notably altering the music, but not steping on anyone – deployed excellently on “Where Are The Cities” and “I Have No Body.” Tracks like the latter bring out the strongest strand in Rayon Beach’s musical heritage – the wave of Aussie punk that seems to be invading the entire world right now. “I Have No Body” cruises on a TOTAL CONTROL vibe, the track which follows feels like a souped-up version of UV RACE who can probably tie their shoes without fucking up.

The vibe of the Aussie sound is tweaked slightly – there’s a bit more energy on “This Looks Serious,” but this LP is still equally suitable for rocking out or eating breakfast. It’s probably most at home in your car’s tape deck when you’re cruising around on a hot summer day with nowhere important to go. It’s not all good vibes, though – the seasick “Airplane With Tits” showcases RB’s range; they can be snotty when the situation arises. There’s an interesting new-wavey quasi-gothy vibe to some of these tracks, the chugging, almost dancey pace, combined with the droning keyboards makes me think this could be equally well received by fans of Sisters of Mercy as it will be by BLACK LIPS fanboys. What makes this record so interesting is the moments like the guitar solo on “Staring Out Of An Apartment” – chorus, delayed, who knows, but the strange guitar texture mixes with the keys to create this cool pulsing sound – this band is lo-fi certainly, but it’s almost a shame that they are – at a time when any sonic dedication to anything but fuzz and noise is passe, it’s refreshing to encounter bands that actually want to produce interesting sounds.

“This Looks Serious” stands out as a…well, serious release – it’s not only good in and of itself, but it’s an excellent encapsulation of where things are at, circa 2012. They’re not an Austin band anymore than they’re a ‘band of anywhere else.’ It’s all just music at this point, and this is some damn good music. Rayon Beach seems to have a remarkably strong grasp of their own sound for such a new band; if this is their first offering, I can only imagine where they’ll be in a few years – watch these guys, folks.